The flamenco of café Chinitas

You are here: Home / The flamenco of café Chinitas

At the Café de Chinitas,
Paquiro told his brother:
“I’m braver than you,
more of a fighter and more of a gypsy.”

At the Café de Chinitas,
Paquiro said to Frascuelo:
“I’m braver than you,
more of a gypsy and more of a fighter.”

Paquiro took out his watch
and proclaimed:
“This bull must die
before 4:30 PM.”

When the 4 PM bells rang,
they left the cafe
and in the street, Paquiro became
a poster-ready bullfighter.

THE FLAMENCO OF CAFÉ DE CHINITAS 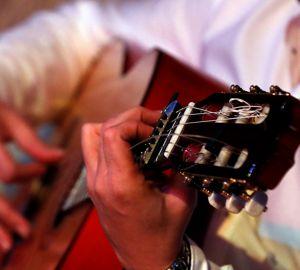 At that time, there was a small bar in Malaga with a tiny stage, with only six box seats on either side reserved for the most important spectators of the city: the Café Chinitas. It was known then as “El Chinitas” or the “Café de Chinitas”, and its story starts in 1857 with the businessman Antonio Maria Alvarez, who would eventually become governor of Malaga. Many legends surround the origins of the café’s name, but the most likely story is that it comes from one of the most successful actors of the time, Gabriel Lopez; now forgotten but then known as “El Chinitas”, thus giving name to one of the most popular and influential tablaos (flamenco halls) at the end of the 19th century.

One day, more than a century later, the Verdasco family is out on a terrace in Plaza del Oriente, enjoying the fresh air and the live music of a street musician, when a transcendental decision is made: motivated by the financial crisis of the 1960s, they needed to transform one of their current businesses in the nearby Calle de la Torija. Inspired by the music being played around them, one of the family asks, “Why don’t we start a flamenco tablao?” “We don’t know anything about that kind of business, but I’m sure we could ask friends for help…” answered another. Many questions and concerns were brought up, but with the certainty that help would come from friends and family around them, the decision was made and the adventure was begun

Despite not knowing much about the ins and outs of flamenco, the Verdasco family did have the knowledge acquired from previous generations, especially from great-grandmother Cándida Santos, founder of their multi-generational family business. She had taught them the importance of following one’s dreams and never giving up, particularly with her own actions in 1870 when she moved from her hometown in Asturias to Madrid to open La Bola, the family’s first restaurant, now open for nearly 150 years.

Thus, breaking all the rules, the flamenco tablao of Chinitas was opened in an old 18th century palazzo, inspired by the most important cantante café of Spain, the original Café de Chinitas in Malaga, as well as by one of the Café’s most important clients, beloved Spanish poet Federico Garcia Lorca. Within a few short months, Madrid’s Café de Chinitas grows in fame thanks to the special collaboration of the famous bailaora (dancer), La Chunga. 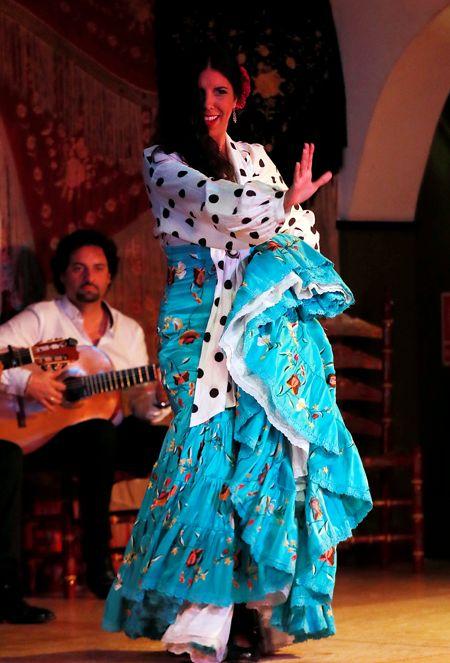 Café de Chinitas quickly becomes known as the best of its kind. Some of the biggest stars of the flamenco world have passed across the wood boards of its stage under the direction of Tomas de Madrid, including but not limited to: La Chunga with her bare feet and spontaneous talent; the legendary Rosario, who shared a stage and awards with Antonio; Maria Albaicín, “the most Spanish one,” whose beauty was ¬¬¬¬honored on the cover of Live; Carmen Mora, winner of the National Dance Prize; Pastora Imperio and the irresistible Morucha… The very best cantaores (singers) of all different styles… We could also mention Maria Vargas, whose magnificent talents bring the listener back to the glory days of the three great rivals, all fighting for artistic splendor, of Gabriel Moreno, classic and profound; Enrique Morente, ground-breaking and light-hearted; and El Lebrijano, genuine and brilliant. 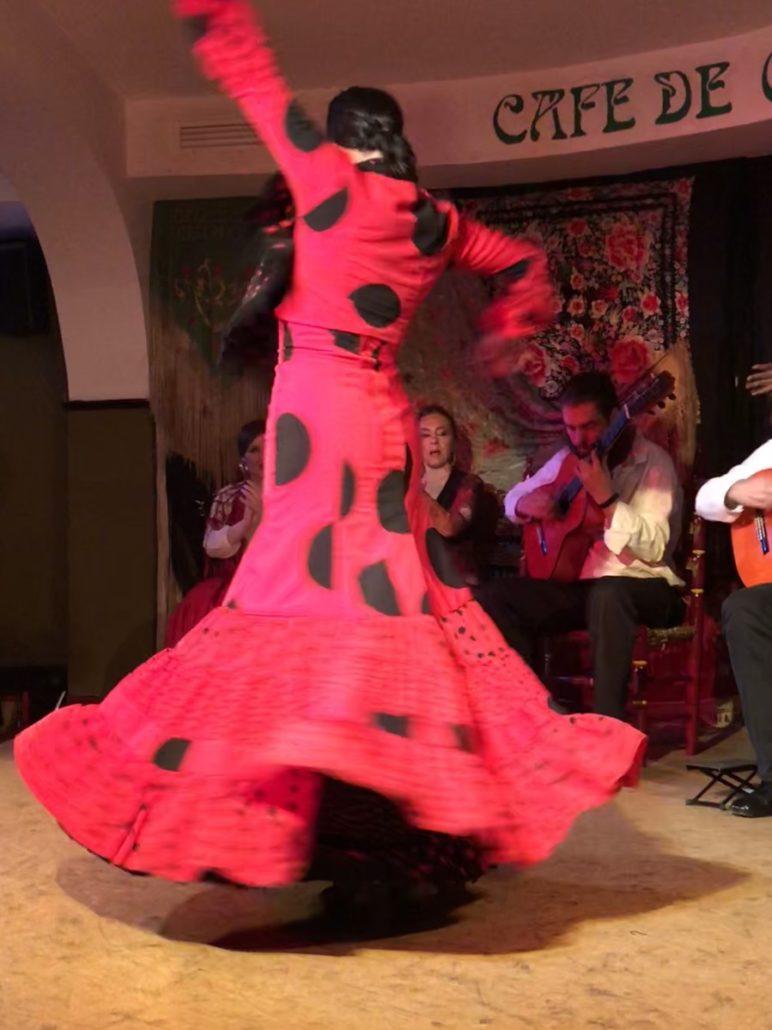 Writer José Luis Castillo-Puche published a report on the tablaos of Madrid, titled “Madrid, the Seat of Flamenco,” whose introduction read: “Any foreigner that comes to Madrid absolutely must visit, at least once, one of the capital’s tablaos. Not only foreigners, but also any Spaniard that comes from elsewhere in Spain; in fact, even the locals, and adopted locals, should do the same. The tablaos are one of the sights to see in Madrid, as much as the Prado Museum, or the Royal Palace, or the Plaza Mayor… In the last several years, the tablaos in the capital city have multiplied. These flamenco spaces are full of character, ambiance, and a characteristic mystery. They are temples dedicated to the religion of Andalusian song and dance. They are not dedicated solely to tourism, though it is inarguable that this modern rendition of flamenco must give thanks to the mass numbers of tourists visiting Spain in the last fifty years.

We hope you will join us on this journey and become part of flamenco’s history. Come with us to experience an unforgettable story… 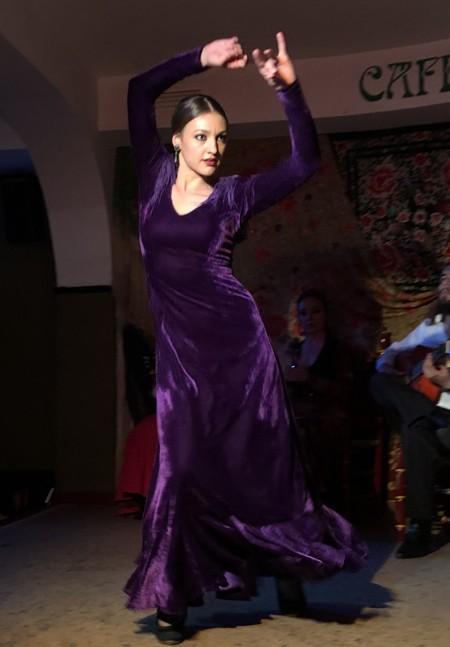 The very best cantaores (singers) of all different styles… We must not forget Maria Vargas, whose magnificent talents bring the listener back to the glory days of the three great rivals, all fighting for artistic splendor, of Gabriel Moreno, classic and profound; Enrique Morente, ground-breaking and light-hearted; and El Lebrijano, genuine and brilliant.

No less brilliant is Jose  Mercé, who began his artistic career on this stage before becoming one of the best-known flamenco artists of our day and age.

On guitar we cannot forget the magical Serranito, whose performances were true show-stoppers.

Flamenco has broken international barriers; not only do our clients come from all around the world, but so do our artists; we have had the pleasure of working with artists such as Georgyos Kyrkillis from Greece as well as Magdalena Mannion from England. This global mindset is a part of our business ethos.

As part of our unending efforts to keep flamenco alive and well in the 21st century, and to help it reach the widest audience possible, in 2010 we joined up with other tablaos in Madrid to form the Association of Flamenco Tablaos of Madrid (la Asociación de Tablaos Flamencos de Madrid). Café de Chinitas played an important role in the creation of this association, whose aim is to unite the most important tablaos of the Autonomous Community of Madrid, namely: Café de Chinitas, Corral de la Morería, Las Carboneras, Las Tablas, y Torres Bermejas. The association aims to spread the message that Madrid is the world capital of flamenco. Our city, through the various tablaos that exist in it, offers the best, most authentic, and highest quality flamenco shows. The biggest artists in the industry live here and Madrid is known as the jumping-off point for their future national and international careers.

With the slogan: If you want to see the best flamenco in the world, come to the tablaos of Madrid! 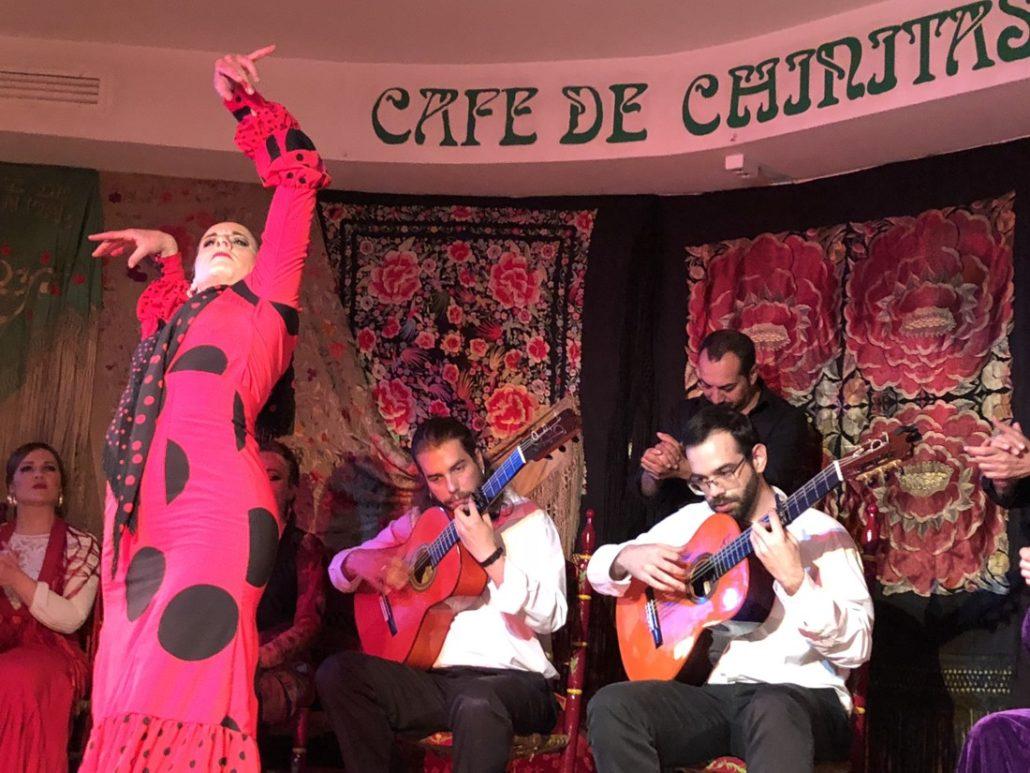 Flamenco has broken international barriers; not only our clients come from all around the world, but so do our artists; we have had the pleasure of working with artists such as Georgyos Kyrkillis from Greece as well as Magdalena  Mannion, from England. This global mindset is a part of our business ethos.

Originally, most flamenco artists were gypsies, and it was unusual to see a payo (non-gypsy) as part of a flamenco performance. But here too, globalization has had its effect, and as of today, we now work with a 50-50 mix of gypsy and payo artists. However, most people see no difference between these two groups in terms of their socio-cultural status, but rather in terms of their performances on the stage. This is a huge step forward in the integration of the gypsy population into Spain; on our stage, you are an artist regardless of where you come from, what you studied, or if you learned your art on the street.

We have brought back the important presence of the cantaora (female singer), who played a pivotal part on the stage of the old tablaos: she was the person that organized the group and quieted the rabble, and so today in our modern tablao we are proud to employ men and women who carry out the same role. 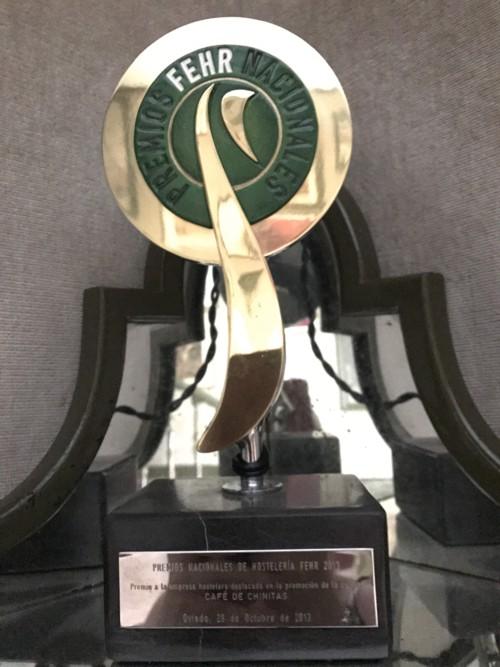 In the arena of spreading the name of Madrid and Spain beyond Spanish borders, Café de Chinitas is proud to be the only flamenco tablao to have been awarded the NATIONAL HOSPITALITY PRIZE by the Spanish Hospitality Federation (la Federación Española de Hostelería) in the category of “Distinguished hospitality business promoting Spanish culture.”

Equally, we are the only tablao in Spain with the privilege to have the Seal of quality “APPROVED BY QUALITY SERVICE CERTIFICATION CRITERIA OF CHINA OUTBOUND TOURISM,” awarded to us by the Chinese government in recognition of our continuous warm welcome and high-quality service to our Chinese visitors.